Making My Own Slice of Home

Recently, I got an orange pumpkin at a local supermarket we’ll call R-mart. This was a pretty big deal to me, as orange pumpkins seem to be extremely rare in Japan. As a foreigner, I’ve occasionally gotten a hold of one, but I always had to know a guy that knew a guy, like some kind of black market.

But finally, sitting there at R-mart, I saw the holy grail of pumpkin aficionados from North America, the classic orange. And to top it off, it was only a few bucks! So I snatched it and carried home like a proud squirrel who has found the perfect nut.

The pumpkin did some time as a jack-o-lantern, and watched over me as I enjoyed a couple scary, seasonal movies. 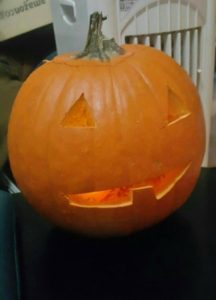 When the time came, I decided to cube up, then steam the shell so I could mash it up. This I made into pumpkin pie. Well, I say pie, but I didn’t want to bother with making a crust, so it was more like pumpkin filling. Anyways, it is basically a very flavorful custard. Nutmeg, ginger, and cinnamon are essential to make it pop. 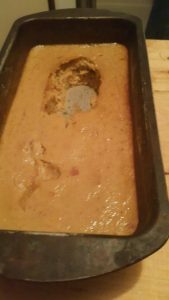 As for the seeds, I mixed them into caramelized sugar, hoping to make a seed-brittle, but it never hardened, and was much more like misopii.